in Qatar, final of the Arab Cup and maintenance of increasingly strong pressures

Which of Tunisia or Algeria will win the first Arab Cup organized since 2012? The answer, the supporters will have it on Saturday evening December 18, at the end of the final which will take place in the Al Bayt stadium, inaugurated on November 30 at the very start of the competition. Located in Al-Khor, north of the capital Doha, it is one of the eight venues where the matches of the 2022 World Cup in Qatar will take place (November 21-December 18, 2022).

Since its kickoff two and a half weeks ago, this Arab Cup has served as a dress rehearsal for the small Middle Eastern emirate before the World Cup. “The event provides a great opportunity for participants and the public to experience the atmosphere in Qatar and the magnificent stadiums that will host the 2022 World Cup“, explained FIFA, organizer of this Arab Cup and the next World Cup.

Thirty-two matches will therefore have taken place during this Arab Cup and the first results seem convincing for Qatar: a fine opening ceremony, a great crowd, pitches in perfect condition, brand new stadiums which have looks great… On the field, everything seems to be rolling. And to make the sauce go up, FIFA has decided to play the final on December 18, a year to the day before the 2022 World Cup final.

December 18 is also symbolic for two other reasons. It is Qatar’s national day and seeing this final take place on this day confirms the efforts of the small emirate in terms of “sport-power” to exist on the international scene. But it is also International Migrants Day. In Qatar, the latter represent 95% of the workforce, coming in particular from India, Pakistan, Bangladesh and Nepal. 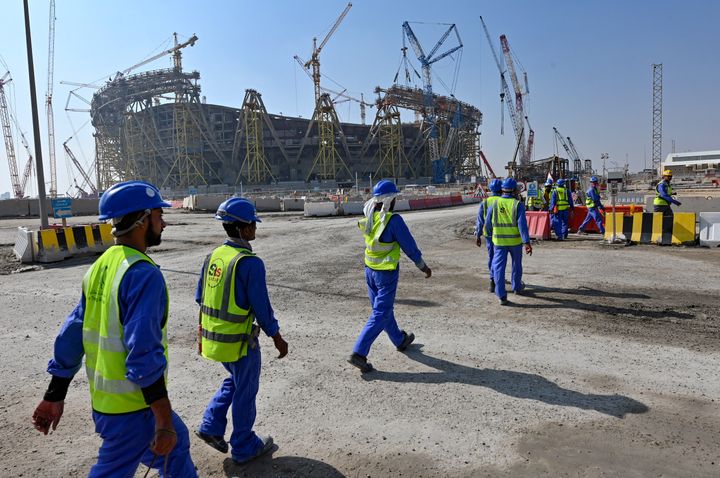 It is precisely the fate of these migrant workers that provokes the ire of several human rights associations. Last February, the British daily The Guardian published an investigation in which he maintained that 6,500 migrant workers had died in Qatar on infrastructure works (stadiums, hotels, roads, hospitals, etc.) planned for the 2022 World Cup. Figures denied by Qatar, which does not list for its part, only three fatal accidents since 2014.

One year to the day from the end of the 2022 World Cup, the pressure continues to mount on Qatar, even though the success of the Arab Cup foreshadows a great celebration at the 2022 World Cup. And the actions are more and more more numerous. On Wednesday, December 15, the headquarters of the French Football Federation was covered with a tarpaulin prepared by Amnesty International: “Thousands dead in Qatar and the FFF still does not whistle“. All accompanied by the slogan: “Bring the Cup to sanity“, subtle reference to the title “Bring home the cup“, post-World Cup 2018 musical success.

On the same day, Amnesty International jointly organized with the NGOs Human Rights Watch and FairSquare a video press conference to denounce, once again, Qatar’s human rights abuses. “It’s been eleven years since the World Cup was awarded to Qatar and four years since the emirate said it wanted to end kafala (sponsorship system that puts workers under guardianship, editor’s note) but the majority of migrant workers continue to be abused, with no one held accountable“, laments Hiba Zayadin, researcher for Human Rights Watch.

Despite Qatar’s voluntarism, which has changed its laws since 2017, “the reality on the ground is that no progress has been made for the workers“, regret the NGOs. “Progress stalls“, denounced Amnesty International in a 48-page report published on November 16. “At the World Cup next year, every fan who attends a match or every player who is on the pitch will rub shoulders with these migrant workers, whose rights have been violated“, emphasizes Hiba Zayadin.

This morning, we deployed a huge tarp in front of the headquarters of the French Football Federation in Paris.

For months, we have been trying to alert him to the exploitation of migrant workers in Qatar.@FFF : and now, can you hear us?https://t.co/Seim15OPDh

In addition to the plight of migrant workers, the three NGOs denounce the treatment of women in the small emirate. Despite these human rights abuses, everything is orchestrated by Qatar to keep the eyes away, according to Nicholas McGeehan, researcher for FairSquare: “The Supreme Committee (the governing body overseeing preparations for the World Cup in Qatar)which is very important, does everything to divert attention from what is really happening in the country.“

While FIFA is also targeted by NGOs, actions are multiplying among civil society actors to contest the hosting of the World Cup by Qatar. On November 26, Bayern Munich supporters in Germany – where the fringe of supporters opposed to the next World Cup is important – disrupted the General Assembly of the club to contest against the Qatari sponsors of the club.

In Norway, the Tromsø club recently played with a QR code jersey which, once scanned, links to a site that denounces Qatar’s practices. The Norwegian selection of star Erling Haaland wore a warm-up t-shirt last March which highlighted the violation of human rights by the small emirate. Despite these initiatives, 480 Norwegian clubs voted against a boycott of the World Cup in Qatar last June.

Sign that FIFA and the organizers of the next World Cup still have room. On Tuesday, they tried to defuse the subject, along with political institutions, during a conference on human rights in Qatar. “From day one, we have been committed to ensuring that a legacy is left before the tournament and that this legacy continues beyond the tournament, particularly on labor reform, but also on other topics.“, then defended Hassan Al-Thawadi, responsible for the organization of the World Cup.

A statement from the boss of the next World Cup which will certainly not convince the NGOs, who plan to increase the pressure as the start date of the competition approaches. Qatar is preparing for a pivotal 2022. What to spoil the party this Saturday, for the final of the Arab Cup? We still seem to be far from it.