Aurélien Tchouaméni, the ambitious midfielder who won for the Blues without skipping the steps

There was a time when, when N’Golo Kanté or Paul Pogba missed a match for the French team, Didier Deschamps had difficulty finding them a replacement capable of ensuring the same level of performance as the two world champions. 2018. Since September, the coach of the Blues seems to have got his hands on the rare pearl, the midfielder of AS Monaco, Aurélien Tchouaméni (9 caps, 1 goal).

In the absence of Paul Pogba, forfeited for this gathering, Tchouaméni acts as interim midfielder. Against Denmark last Friday at the Stade de France, the Monegasque gained strength as the match progressed to reign in the midfield. Without complex or pressure despite the defeat against the semi-finalists of the last Euro (1-2). Monday, June 6, Deschamps should start again Tchouaméni for the second match of the League of Nations of the Blues against Croatia.

While bodies and minds are generally exhausted by the season within the tricolor workforce, Tchouaméni is one of those who have the most freshness. While he is, with 59 games played this season in clubs and in selection, the one who has played the most with the Blues. During the last training session on Sunday, in the moist heat of Split, it was he who occupied one of the two positions in the middle, alongside Mattéo Guendouzi. A sign that in the mind of Deschamps, Tchouaméni has indeed passed number 3 in this sector of play, behind Pogba and Kanté, and ahead of Adrien Rabiot.

Last October, his performance in the final of the League of Nations against Spain, for his fifth selection, had impressed. This first trophy won by Tchouaméni finished taking him to a new dimension. An international dimension. All for a young 22-year-old player, who has never played a single Champions League match. Tchouaméni is however not the type to burn the stages. The one who was elected best hope of Ligue 1 at the end of the 2020-2021 season is ambitious, but has always passed the milestones one by one.

A linearity that made his U20 coach, Bernard Diomede, regret not having spotted him earlier. “I had seen him with the U18s and U19s. But when I had him with me and saw his potential, his intelligence, his thinking about football, I wondered why he hadn’t arrived sooner.“, explains to franceinfo:sport the one who preferred Guendouzi, Boubakary Soumaré or Michael Cuisance to him.

Described as “humble“, “hardworking” and “listening“, Tchouaméni is progressing, step by step. Matthieu Chalmé, who was his reserve team coach at Bordeaux during the 2017-2018 season, remembers a Tchouaméni “who was sometimes bored, it was so easy“.”He liked to play sentry very much. But it was too simple so we tried to pass it on as a torchbearer. He was reluctant at first but we discussed it quite a bit. He ended up taking pleasure in it and realizing that he could give another dimension to his game.“, says Chalmé.

Tchouaméni is aware of certain qualities which led him to his first selection with the Blues last September against Bosnia-Herzegovina in Strasbourg (1-1). And who encourage him to continue to aim higher. “At the last gathering, the three of us were talking with Lionel (Rouxel, U18 coach) and Aurelien. He told us that he is young and that he does not want to set limits. It marked us“, describes Diomedes.

Go through the stages, but always one after the other, also facing some difficulties. Tchouaméni thus had to fight when he arrived in Monaco in the summer of 2020, after a transfer of 18 million euros from Bordeaux, his training club. “He put more intensity into it. There was such strong competition that he couldn’t help giving it his all. He was in the overcoming of himself“, assures Diomede. An experience which served him to impose himself in the France team, in the midst of players crowned world champion in 2018. 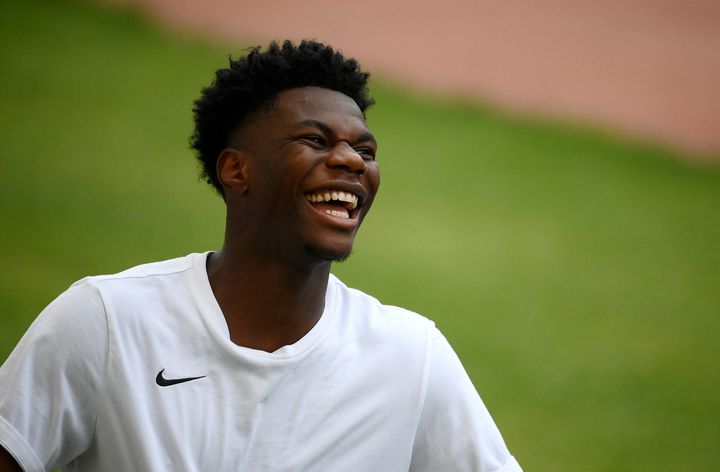 Recently, it is in the offensive sector that Tchouaméni has shown himself to be successful. A first goal with the France team in March to offer victory against Côte d’Ivoire then a double, two strikes from outside the area, against Lille in Ligue 1. Above average technically, Tchouaméni would see well in a complete midfield, capable of defending as well as attacking.

“Everything in its time. Aurélien’s priority, for the moment, is to be clean in his game, and as his career progresses, he will let go“, tempers Chalmé. As for Monaco, his coach Philippe Clement is conquered: “He is an exceptional player, with a desire to improve. Each month, he goes through other stages. It’s clear, he’s going to have a great future.“

Deschamps too. “Compared to what he had already done with us, it’s high level. He has enormous potential with a lot of control. (…) It is in constant progression. It’s a very good thing for the French team and for me.“, assured the coach during the rally in March. If Deschamps can count on him for the next few months, it is not certain that Clement still has Tchouaméni in his workforce next season.

For the middle of Monaco, the time has come to move on to the next step, with a departure which should be formalized in the coming days or weeks. A waltz with three contenders is currently being played out between Real Madrid, Liverpool and Paris Saint-Germain. If he were to sign for a big club, Chalmé didn’t “no doubt about the fact that it will be able to impose itself everywhere“, a few months before the start of the World Cup.

A World Cup in Qatar (November 21-December 18) which will be Tchouaméni’s next goal in selection. And that Deschamps is reassured: if he cannot count on Kanté or Pogba, he will be able to rest on Tchouaméni, who will certainly have passed other milestones by November.